People asked where I got tautogs in April in Rhodes Island.

Well, they present special challenges since there are less of them, but also because they behave strangely…

Unlike in the late season or winter, tautogs don’t necessarily hangout deep. The water conditions appear similar to those found in winter, so you would expect to find black fish past forty feet, perhaps as deep as sixty or eighty, …

which is challenging since, for instance, the 7 mm suits get crushed to nothingness… Yes, even my fabulous Yazbeck miracle suit. Also, diving this deep in the cold winter waters means a long ride in the dark until you hit something invisible, you hope is the bottom, at which point you get to wait and hope your eyes adjust to the dim luminosity. Only then can you find out if sank into a deathtrap. Sometimes they never do adjust and you are left to wonder as you lay there in the dark like a blind idiot. And if you think it’s all in your mind, and that you are mostly safe down there in the dark, let me tell you about the time my eyes adjusted to the sight of a freakishly large electric ray hovering inches away from my face. Pleasant times if you like being cold and afraid, but then isn’t it why we spend hours stewing in our own piss?

Fortunately, the April togs don’t require this sort of foolhardy voyage into the abyss. You’ll see the fish as shallow as ten feet. Don’t waste too much time below forty.

The most productive areas are inside bays… where the water is warmer. Perhaps the rising water temperatures is the reason they come up from the depths in the first place. My theory is that we see more togs in the warmer water. So if you know a spot with slightly higher temperatures, I would start there.

I always see them in the same type of rock formation. In the summer, we find schools on flat rocks etc. This does not happen in April. The fish remain under boulders. Look for rock piles. Larger rocks on top of smaller rocks appears to be the most productive. The fish always faces the depth.

The rock pile has to be on an incline and lead to deeper water. Breakwaters are an obvious choice, but those are not the most productive spots since the early season togs will have nothing to do with you. They’ll soon move to safer, unreachable holes. A bunch of rocks in an open area is optimal.

Dress well, I wear my full 7 mm Yazbeck, as well as mittens, not three finger gloves. The mittens don’t help with pulling the trigger but then frozen fingers are no better. The smaller guns will get you more fish. Don’t expect to see any pelagics anyway.

For instance, my single band sixty centimeter speargun was the obvious choice until I shot a 24 inch monster at the very end of the single wrap of shooting line of the tiny gun. Switching to an eighty resulted in lost opportunities, so I reverted to my sixty, so I suggest you bring the smallest gun you own.

You will have to swim quite a bit since the early season togs are few and far between. It may take a while to see even one fish. This early, they hide in the shadows and are not inquisitive in the least. The good news is that they are well distributed. If you fish an area well, you will probably find them. You don’t have to find a magic spot, almost anywhere will do depending on your skills. 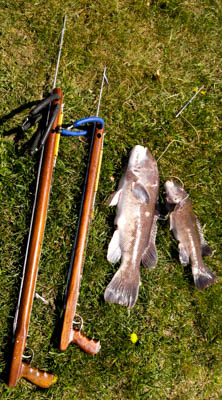 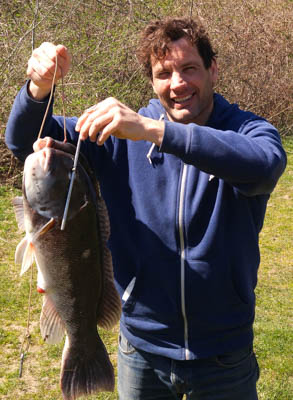