I’m back in La Paz. Same address, different apartment. They rented my penthouse to someone else the bastards. 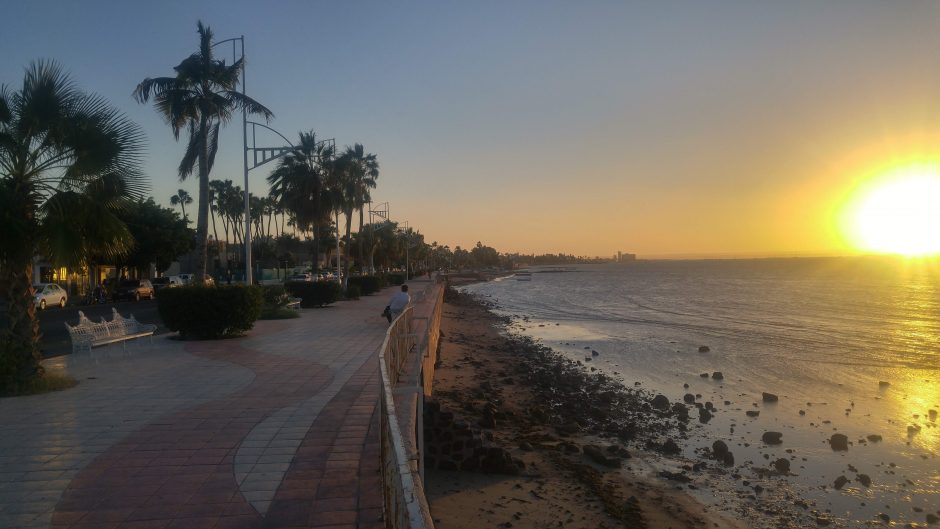 The scene in the water is quite different from February and March. For one, the water is super warm at 27C (81F). On the other hand, it’s been just as windy, which is not entirely normal for this season. Last week there were three days of heavy wind from the east. It may have something to do with the cold front up north. By the way, I hear it’s been -15c in Montreal. I feel for you guys. 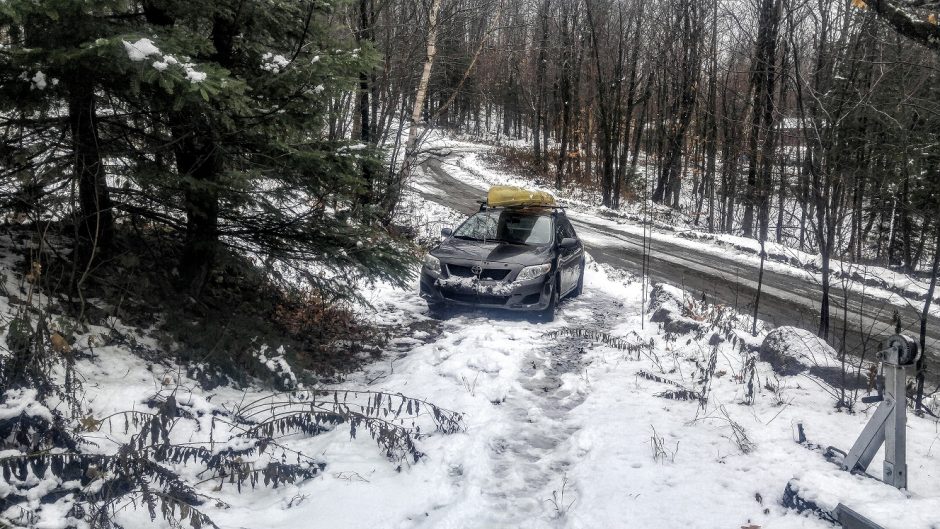 Leaving from my house in St-Adolphe, Quebec. Novembre 3rd, 2018, and it had been snowing for a week already.

Yesterday was the second day I was in the water since the three windy days. I dove somewhere south of La Paz. I crossed the baie and anchored my kayak next to a rocky cliff. Within five minutes I saw a 50 pound grouper. I hadn’t seen a single large grouper last season. I didn’t get a shot and I could not find its hole. It may have swum too far or hid well into one of the many holes, too many for me to do a systematic search. It didn’t get to be that big by being stupid… Anyway, I’ll be back. At about that time, the water got murky.

The visibility went all the way down to about 3 meters (ten feet) thirty minutes into the dive. It was about 3 pm so there was plenty of light even with the overcast sky (another rarity for this season). I continued fishing while pulling my kayak like a dive flag, working my way toward the point.

At some point, I went down I saw the shadow of a pelagic at the border of vis… I didn’t take a shot. I was very unsure of what I saw. In my mind it was another large wahoo I will have missed lol. I went to the bottom hoping for it to come and see me. The visibility at 20 meters (66 feet) was about 10 meters (33 feet). I was surrounded by boulders. I started looking for groupers and snapper. The snappers I’ve seen up to now have been in the small 2 to 5 kilogram category (5 to 10 pounds), so I’ve not shot any.

Sure enough, the pelagic made it’s appearance… in the most dramatic fashion, much, much too close to me, and it smiled! It was a seal. I could have shot a seal. That would have been terrible. I guess that’s the reason we don’t pull the trigger without having a clear idea of what is in front of us.

So now, I’m thinking. There are seals in very limited visibility, in Baja. Awsome, I’ll be eaten by a great white or a pod of killer whales! I’m nervous for a few minutes before I go back to “fuck it” mode. I believe that state of mind is the secret to happiness, not that I successfully stay in that zone all the time, especially at 4 am mouahahah.

I continue swimming with my kayak in tow. I’m good for a while, not seeing much. Then as I’m swimming on the surface the muck surrounding me explodes with creatures. I see they are fish-type things! I shoot what I think is a pompano type fish… Sure enough it’s a roosterfish… f…! I never shot one, so I guess I’m allowed the one in a lifetime.

I strung the darn thing. At least it didn’t cost me a shaft. I did not give it an inch of reel line. Oh I lost that tug of war and got dragged down. Still, I did not let it have an inch. The power of that beast was impressive! It took about ten runs before I was able to handle it, and that was a mere 10 kg (25 pound) roosterfish! 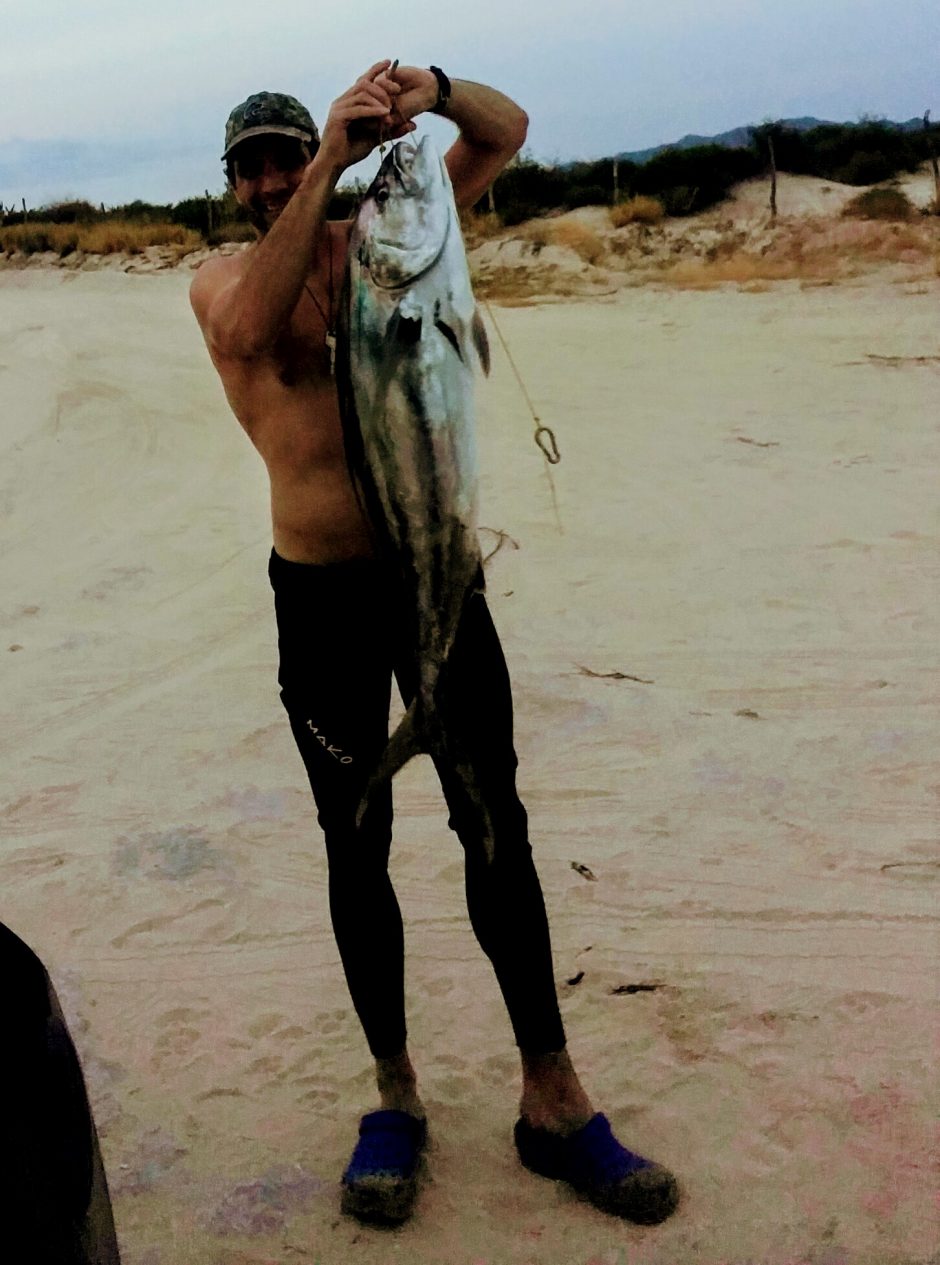 I bled the rooster the best I could. I cut the gill and let it empty itself in the water next to my kayak… trolling for great whites. 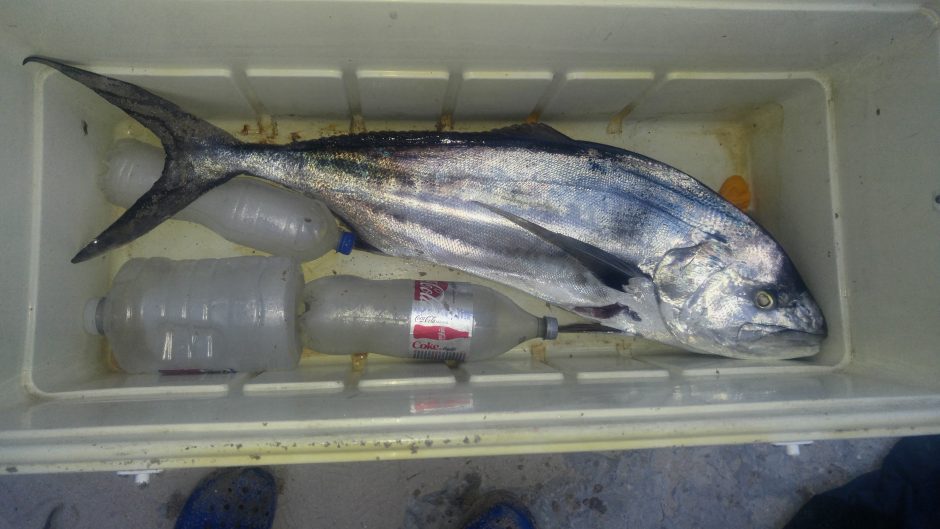 The fish was not wasted. It ended up on a BBQ at a shelter for addicts in La Paz. I can confirm that it’s bony and fishy, yet edible, just not the best ahahahahh.

I swam further to the point. There I could hear whales. I had not heard any such mammal last winter. Baja is an interesting place to say the least.