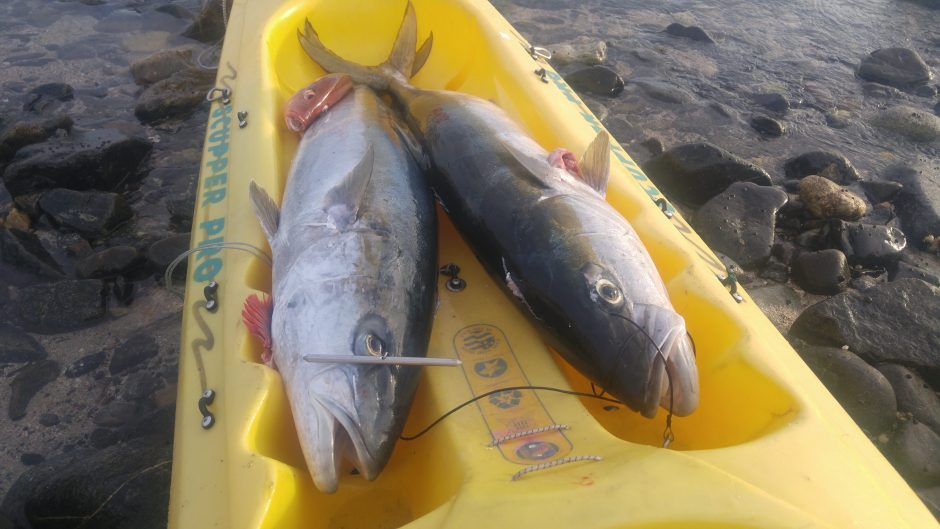 Sand whipped my legs as I got out of the car. The furious wind had kept all fishing boats out of the water. It was the first time I had ever seen the ramp empty. The water was covered with foam and spray… these were good conditions for kayak diving and the most secure I could hope for for since the greatest peril was out of the way.

I headed to the spots that are normally hazardous because of the boats.

Like anywhere else, the Mexican boaters don’t pay a whole lot of attention to dive flags. In their defense, I was run over only once (I have footage of the props passing over my head) while diving here. Given the time I spend in the water while in Baja, it’s a much better rate than in the US, the Bahamas and Canada. In Rhode Island, I managed to get run over three times in a single summer, in Florida it only took a week for a four-prop boat hit my kayak (video from underwater), and in the Bahama a 50-foot racing boat hit and flipped my 13-foot yellow kayak, with a huge flag, on a flat sea with unlimited visibility! I can’t count the times my kayak got bumped by boats, again, it’s yellow and I have a very large flag on it… So, If you believe boaters will pay any attention to your dive buoy, I believe you are deluding yourself.

On the first spot, there was no fish. At times, this cold season has been hard on the moral. Often the bottom looks like a dead quarry, even the corrals look sad. Fortunately, I almost always manage to find some life deeper. So I swam to the edge of sand. In the area where I anchored, the sand begins at 24 m (80 feet). I say begins. Most of my dives are a little deeper, but I never go beyond 27m (90 feet).

About dept, I was still within my comfort zone, on that day, sometimes I’m not comfortable past 22m so It varies too much to give much mind to my watch (LONG NOTE: In my opinion, the watch is only useful when I dive too comfortably too deep, right now I wouldn’t fish beyond 27 meters even if I felt fine, even with a good spotter, if on a specific day I feel fine at 30 meters I might smile, but I will turn around since experience has shown me that I simply don’t have enough margin at that dept, and I don’t see a point risking my life for this, and the ride up from too deep is simply horrible… I may still die spearfishing, better this than most other ways I guess, and I fully accept the risk, but I try to check the ego at the door as much as possible and dive to depts that don’t involve fear of not reaching the surface).

The first 10 meters of surface water was murky. Past this cloud, I could see 30 meters. This provided an exceptionally wide glance at the bottom. There was nothing! I could see all the way to the rocks and into the great beyond. Shivers ran down my back. I was cold like a guy with a four-year-old suit that was not seeing fish.

I got back to my kayak. I pondered about the futility of this, life in general and fell into an existential crisis. I thought maybe I should get out, find another hobby, learn so knit, join a theatre group, learn Salsa, then I remembered how I hate dancing, and salsa music in general, so I paddled to another spot. The wind made it difficult to paddle in that direction, especially with my sobbing, but I’ve never seen winds strong enough to stop me entirely! Kayaks are great in hard wind.

I anchored on a reef right in the boat channel. On a normal day, I might as well be smack in the middle of Port Everglades inlet. I’d get run over every five minutes.

As I put my face in the water, I saw baitfish! Finally, some life! F.ck salsa! I got my 130 cm speargun with two bands. It was a reef, and it was the gun with the wire shooting line. The 150 cm gun with three bands is the one I use almost all the time, but it made no sense using it there.

Five minutes in, I shot a small yellow snapper. I put it on my back and pushed on.

I got to the sand again. It was only 16 meters deep. I was not these long before a yellowtail swam by. I moved my hand and it came closer. I shot it from under. The shaft passed through it. The fish fought, but not much. Since I shot it from the bottom, it was fighting belly-up. That usually sedates fish. The yellow tail joined the yellow snapper on my stringer. The yellow tail was 27.5 pounds, so it was cumbersome, but I often dive with larger stripers on my back.

I dove again. Nothing in view for a few second, then another yellowtail came from far away, lazily following the bottom. I didn’t have much breath left and that thing seemed to take its time… I managed to wait it out. I shot from so far, the shooting line stopped the shaft… Fortunately the shaft dug into the fish far enough for the flopper to open.

I head for the surface. The reel line came out. Once on the surface I stopped the spool. Only 20 meters of line was out. I tried to reel the fish back in. It worked for a while…

I could not see the fish since the visibility was not that great. My reel line was going straight down. It seemed stuck. Great. I went down to investigate. I followed the line, never letting it drag the gun down. I saw the yellowtail and a “macramé” of line around every rock and reel head there is. Oh boy. The web is 5 meter wide.

My second gun was on my kayak, 200 meters away, and I would never have found my gun again if I had tried to get it… so I breath-up and go work on the line. I was grateful I didn’t have to worry about boats… The entire time, the yellowtail was trying to entangle me… I made sure my knife was ready. I finally got most of the line off the corals.

I was back on the surface, taking a few breaths before resuming the dangerous work, when the line started moving again! The fish had managed to untangle the line! I reeled it in as much as possible. That’s until I saw a huge mess of entangled line… A big knot with wide tentacles. I needed to leave the gun behind and work the line by hand all the way to the fish. During this time, the fish turned and turned around me. My fins, my knife, kept getting caught in the line.

When I got the fish in my hand, there was line everywhere. I couldn’t use the gun anymore. So I swum back with three fish and what looked like discarded fishing net. It took me 15 minutes to get the line untangled, and that was in my kitchen! (video of that ordeal coming soon). 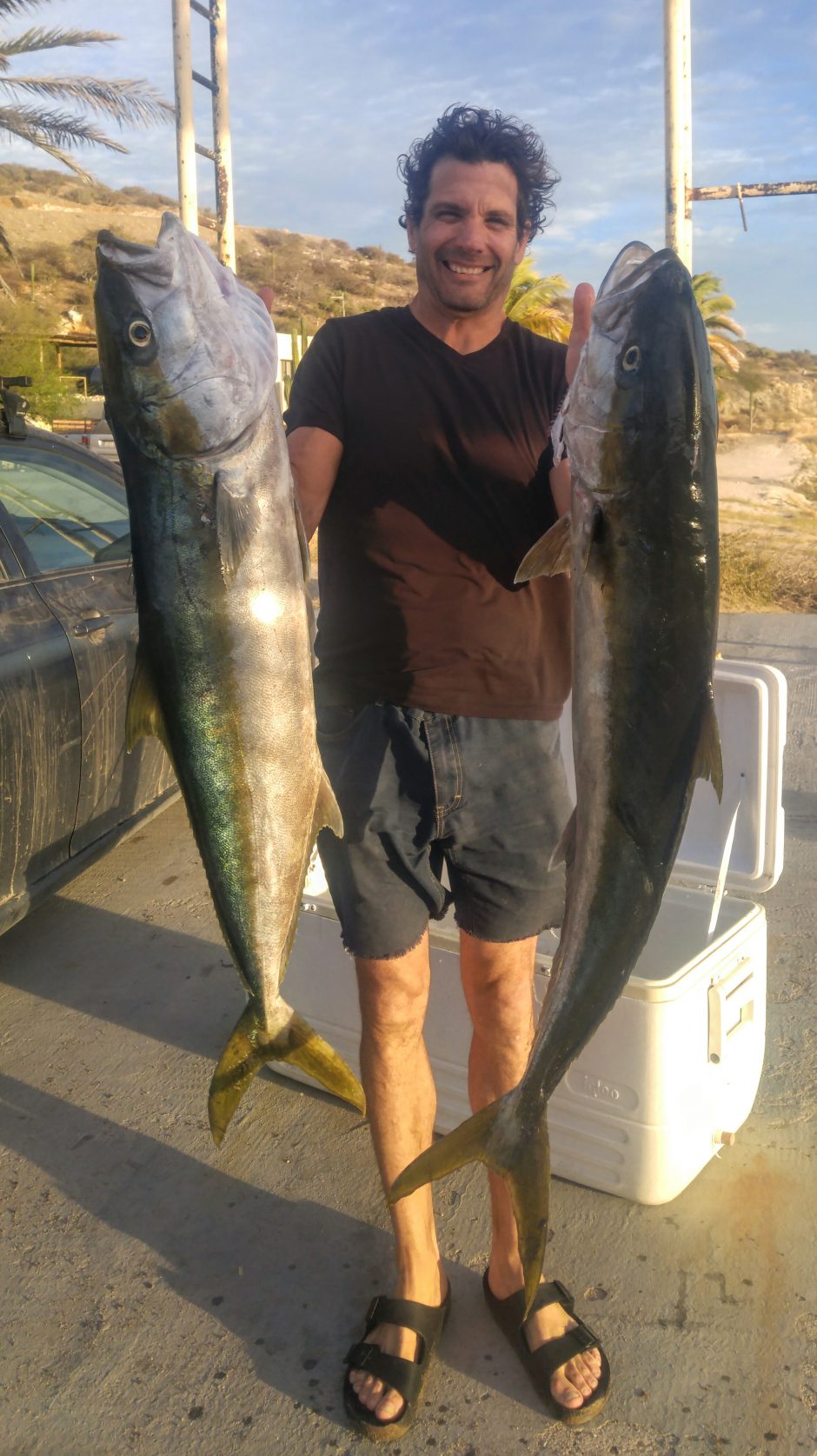