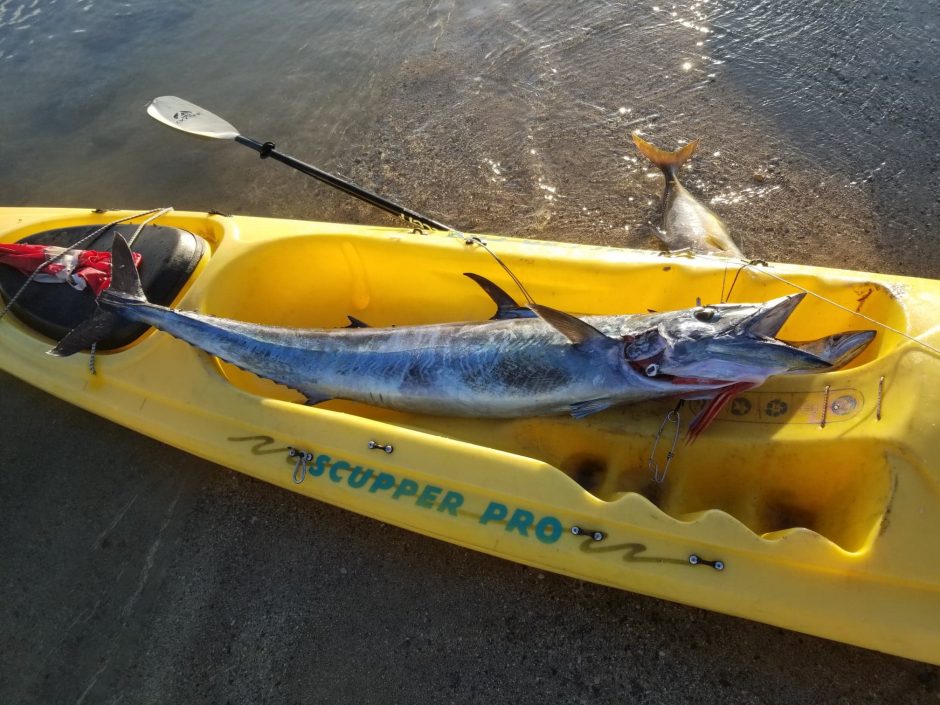 first wahoo of the season

In November, Fishing has been less than optimal in La Paz.

Intense rains and winds have affected the visibility. It’s not been impossible to get good fish, but I haven’t crossed easy prey. The good stuff stayed below 23 meters and the larger fish under 25m… maybe the cold had something to do with it.

Overall, the surface water remained warm but it went from 25 to 24 in a week (it stayed at 24 until the second week of December). I sometimes noticed that a cold layer of water rising from the depths.

Anyway, on the last day of November, I fished an area less affected by the pollution caused by the runoffs caused by the previously mentionned rainfalls. On a side note: La Paz does not have a very good sewer system and no way to manage rain. It turns the street into rivers and spills into the bay. Don’t go swimming for a few days after any storms, would be my recommendation.

It was past noon when I got into the water, I fished a reef that came up to 25 meter with the sides going down to 27 to 29 meters. I saw small cuberas and yellow snappers; nothing interesting. Then a mackerel passed by.

After putting the little fighter in the kayak, I swam farther from my kayak. I laid on top of the reef when I saw a 5 kg grouper. I pondered a while before taking the shot. It was far from the ledge and holes, so I believed I was safe…. but as soon as my shaft touched the grouper, predicatively it bolted like thunder into a crevice on the side of the reef.

I had a fish holed down at 27 meters… No drama since there was no current. I went down once to see what I was up against. I dreaded seeing the shooting line all they way into a hole. Fortunately the shaft stuck out from the entrance.

I got back down after what seemed like 10 minutes to get the fish out. Apparently the grouper tore itself off while I was trying to calm down enough to work efficiently at that depth… great, I wounded a fish for no good reason and I had a tangled mess of line coming out of my gun. After undoing the line on the reef, I was back at the surface… with 30 meters of reel line dangling. I tried to reel it in but the barb stuck again. I worked on this for a few minutes (jigging from the surface) until it came loose and I started the long process of reeling in 30 meters of line; each turn taking in perhaps 10 centimeters of line.

In my peripheral vision, I saw one, no seven wahoos! Of course they would choose this moment. They cruised slow and circled me while I reeled like a madman…. SCREAMING inside! The last one swam lazily away as I tried to put the shaft back in.

Game on, I thought.

I slapped the water and dove up and down the water column. Somehow this makes wahoos get closer sometimes…

On the bottom, I saw groupers, snappers, they could all go to hell. Finally, after thirty minutes of frustration, I distinguished far-off shapes above me. I was rising from about 25 meters. I slowed my ascent and stopped at 15 meters. The wahoos did come closer but too far for a shot though… so I moved my hand a little (puppeteering works on yellowtail so why not) and finally one of them turned towards me.

I refrained from looking at it and I didn’t dare pointing it preemptively with my gun. I had my short reef gun after all; it’s a 125 cm with two bands and a 7.5mm Tahitian shaft.

The fish got close enough and didn’t react when I raised the gun. Obviously, the camera was out of battery…

It took most of my reel line on its first run, maybe 40 meters of the line I had painstakingly reeled in a few minutes before. I swam with it during its three big runs to reduce the resistance. My nylon line stretched marvelously (no stiff spectra on this reel, otherwise the fish would have torn) it felt like a giant magic bungee cord.

My kayak was far, far, and it was at least 1 km from shore itself. I had a second gun loaded with one band hanging on the side of the kayak for this specific purpose. I had to get to it. I could not see the quality of the shot I had taken, but I knew I’d want to double it anyway.

So instead of taking line in, I swam the fish back to my boat. It took 15 minutes. Plenty of time for the wahoo to waste all its energy. Close to the kayak, I reeled the line until I could see the silhouette. I clipped the gun to the kayak and grabbed the loaded 150. I swam down to about 15 meters; the fish had taken some of my reel line in the time it took me to go down. I placed the second shot in the head. Game over.

Wahoo in cooler with small amberjack and mackerel.