In December 2019, while the rest of North America was swept by storm after storm in what looked like the plot of yet another end of the world movie, Baja was doing fine. Perhaps a little cooler than usual and the winds kept things interesting for kite surfers. A friend told me he kited 19 out of 21 days; something unprecedented. 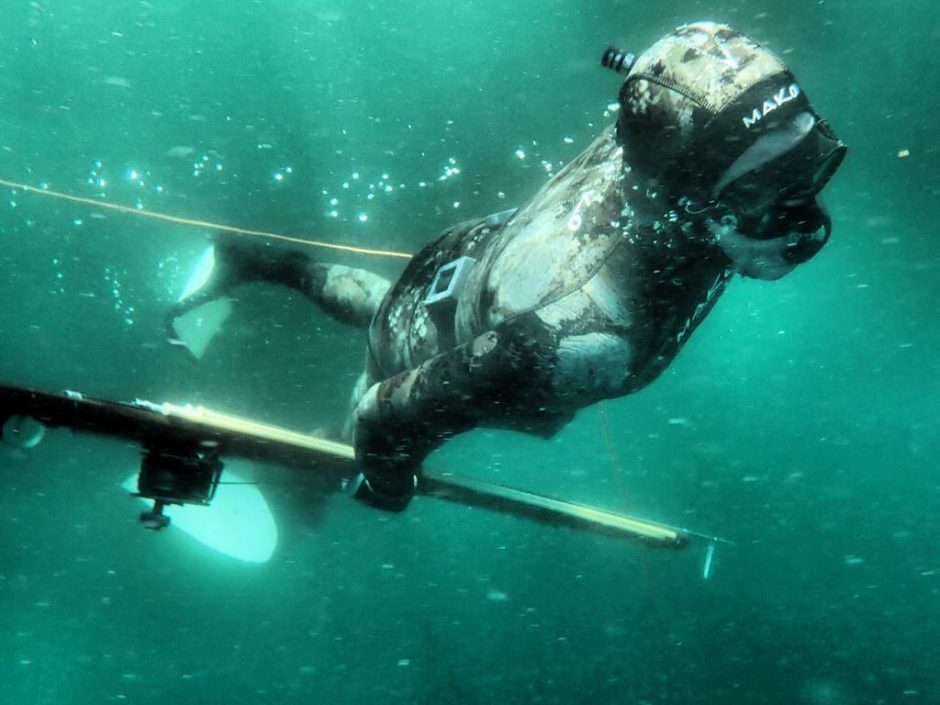 During the last week of December, the water temperature fell from 22 to 20 Celcius. That was a drastic drop. I went from the 3 to the 5 mm suit. I had gotten so used to the 3mm and it felt like diving with a winter coat; one that floats. I had to go from 3 kg to 6 kg on my weight belt. I’m sure I’ll go back to 5 kg as the suit gets compressed. [a side note: It shouldn’t be long since I spend most of my time below 20 m. In my experience, Yamamoto 39 doesn’t hold up long in those conditions. As a side, side note : I wish I knew what material Dessault used for the Xtend wetsuit line. It’s something made in Japan exclusively for Dessault according to the website, but I doubt it, comment if you know. Those kept their shape much better.]

Other than the wind and cold, we got red tide. I’m not sure if it qualifies since it doesn’t kill fish by the thousands, but we get brown-red cloudy water patches and whenever I swim in it, I sense a tingling in my mouth, and some coughing is involved. It feels unhealthy somehow.

The seals came with the cold water. They have never been a troublesome presence. Last year a bull did circle me while I was on the bottom, but it kept its distance. I think the most annoying thing is that the fish hole’s up when the beasts are around. I can’t blame the fish.

Anyway, just after Christmas, I went out on a windy day. Those are the best to avoid the commercial fishermen.

The crossing waves created confused seas. It took me a little longer to get to my spot and anchoring was challenging. I missed the reef and had to paddle back up-current and wind twice before I touched the top of the rocks 21 meter down. I only had my memory from last year, land references and my “feeling” to find the spot. For some reason, I never open my GPS (I have two with me, as well as a fish finder).

The anchor line was taught. That wasn’t a good sign. It meant the wind and current were taking me away from the reef… what could go wrong? Had I known I would have chosen another spot. This was ridiculous. Once anchored, I had to go down to retrieve the anchor if I wanted to change venues, so I figured I might as well try to fish it.

I held the kayak a little longer than usual. I checked if I could “swim it” at least. You don’t want to be taken away from your kayak. It’s not so bad if you are close to shore and know you can swim the coast and get back to your boat, but I was at least 300 meters from shore and it opened on a bay… Seriously, it would have taken an hour or more to get back to shore, and then some time to reach my kayak again.

To be extra sure I was not setting myself up for a long “death swim”, I moved up-current 25 meters before going down. The visibility was bad; maybe 5 meters. There were clouds of brown water passing by, sometimes reducing visibility to 3 meters or less. On the bottom, it was a lot better; easily 10 meter.

Unfortunately, the fish were not on the bottom with the nice water. The only life seemed to be in the clouds.

On my first dive, I surfaced about 10 meters down current. I estimated I was safe from drifting away but not entirely reassured. So I kept fishing around my kayak. I was diving the drop off. Somehow, I had anchored at the very best spot.

Baitfish stayed with me while on the surface. On my sixth dive I saw larger prey in the muck. Only silhouettes since I had the sun in the background. Were those albacore, bigeye tuna, frigate tuna, small yellowfin tuna, bonita or skipjack? How the hell would I know? They never got close, so I took a shot before they swam out of range.

I placed it well even though it was a long shot. The fish bolted. The entire time I’m hoping it’s not a bonito. I’m very delusional. Then I see the lines, it’s a skipjack. Oh well. Still a lot of fun. Check the footage and you’ll see it wasn’t so easy to tell unless you deal with those types of fish all the time.