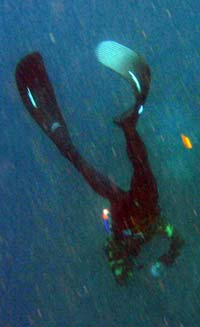 Diveskin.net was the wetsuit sponsor for the canadian team. Spiros made us three custom size suits. We chose the army camouflage and told him to go hard on the logos ;-) Wait till you see the pictures. The material resisted pretty well to compressions, which was a real plus since most of our fishing was done below 20 meters.

In March 2006, I made a month long trip to Brazil for the FIPSA spearfishing world championships. The experience was so rich that there was no way I could write it in one sitting. So I decided to write it in segments. Not all of it has to do with spearfishing, I also get lost in details and go into lengty tangents about all sorts of things. This is the first segment.

When Luiz Pereira asked me how I planned to get to Cabo Frio from the airport I told him I would take the bus.


As it turns out, in Brazil, the compulsive lane changing, tailgating mad men drive buses. The 18 year olds on crotch rockets that we scrape off the road in spring are no match for those caffeine laden F1 driver wannabes.

My favourite was the bright orange Copacabana to Lapa night bus that swirled through traffic lights at 110 km/h to the rhythm of drunken girls singing while tugging on the passenger bars. When the bus reached a hard curve the driver would resist touching the brakes all the way to the curve. As soon as it got inside the curve the entire bus would start to shake as it accelerated towards the next curve. People in the bus only cheered if the tires got some “air” time.

All the buses I’ve taken, local or otherwise, were in really good shape and often had air conditioning. Other very significant features of the Brazilian bus are its super smooth manual transmission and the sporty drivers’ cockpit. Either the companies change buses often for comfort or they have a short life span.


Luiz was not worried about the driving or the buses but by the 100 meters I would have had to cross to get inside the bus station had I taken the local transportation. Initially he told me to be very careful but to not look scared as I would walk towards the “Rodovaria” or bus terminal. As you can imagine this is not the sort of advice I got living in Canada or even during my stints in Bridgeport or Harlem. But finally Luiz cracked and decided to meet me inside the airport and escorted me directly inside the bus station.


Two weeks later I returned to the bus station and walked the 100 meters from the city bus to the terminal and I can vouch that during midday the area compared better to Newburg NY on "crack night" than to lets say Greenwich CT on an Easter Sunday. While not a favela it’s a bad neighbourhood even by Rio’s standards.

For those unfamiliar with Rio. Out of 5 French Canadians living at my hostel (three individuals and one couple) I was the only one not robbed during the week I spent in Rio. A British guy got mugged twice: once on the beach, once on Atlantic avenue.


In Cabo Frio, where the competition was held there were no real security concerns unless you went out of your way.