Sunday (sometime in June 2007) Jean Jacques and I went diving in front of Brenton reef. The sun was shinning and the waves were low but the wind was picking up. It was a perfect boating day about to turn lousy.

At around 12 we were at Seal's ledge. We had our dive flag mounted on the zodiac and I was diving no further than 50 feet from the inflatable.

I dove to about 30 feet on the ledge's drop-off. I settled between rocks for about 30 seconds before the first bass showed. I waited for larger specimens another 20 seconds before I elected to shoot one of the 20 pounders circling me (see schoolies on picture below).

I took a shot with the new 90 cm Iroko gun I built this spring.

I hit the fish where I intended but it didn't die. It's not like I expect these fish to have a brain large enough to hit... otherwise they would not circle guys with spearguns.

Anyway, the fish is doing its death dance when I notice a propeller noise. It appears to be coming straight at me. As I work the fish underwater the noise keeps getting louder and I half expect it to start fading as the boat finally passes but it's not.

I've been underwater for a while now and I am looking at the surface wondering if I should get back up. But it’s still manageable. The winter training is really paying off I thought.

I left the bottom and slowly headed for the surface. I stopped approximately 6 feet from the surface since it was obvious the boat was coming straight at me. I feared that I may already have been too close to the surface but I was cool headed enough to figure that it would be too demanding to swim back down. It was better to take my chances at 6 feet. 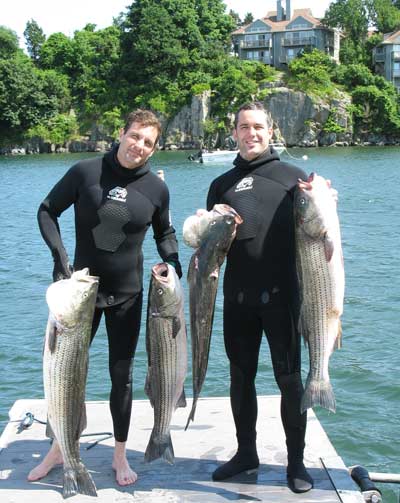 I waited about 10 seconds at that dept and the noise became a rumbling, pulsing, screaming whine and I really did wish that I was 10 feet down instead of 6...

And then, in an instant, the water on my right pulsed and turned into bubbles. I did not see anything pass. I only saw bubbles coming sideways.

I finally surfaced in the bubbles and saw a large cruiser speeding away with about 8 people drinking away in very fine clothes. Jean Jacques was also on the surface mere feet from the foam trail. He never noticed the boat and came up as it passed.

I screamed like a madman while the finely dressed champagne drinking folks on the brand new boat just looked at me like I was some 'commoner' that should not get in their way.

The boat came so close it could have caught my anchor line...

Diving on a Sundays at Brenton Reef has become a scary proposition.