In October 1998, Roger Yazbeck and me were invited on Bill McIntire's boat. (Roger and me know nothing of spearfishing in California, we are North Atlantic Freedivers.) The first day we dove San Clemente Island. As soon as I got off the boat a Yellow Tail passed in front of me. It was only 15 pounds... so I asked Bill if I should shoot it. I did not think I should shoot anything this small. By the time he replied, the fish was gone.

I spent the next hour dragging Bill's Pipe Gun through the kelp beds. By that time, I saw another one. I strung it. I was very impressed by the fight this fish gave. I was even more impressed when it ripped itself in half and swam away!

(Bill helping Roger out of the water) 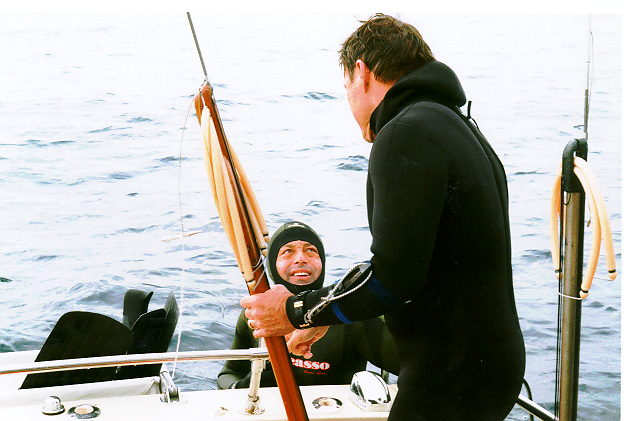 Not long after, we went to another spot. There, the kelp was much thinner, the bottom a lot further. The visibility was good but the water was cold. I was fishing at 15-22 meters (22 meters being the total length of the float line I was using). Bill came out with a nice Yellow. This got me real motivated and I headed deeper. I swam far from the boat, away from the coast.

I was hanging with the gun at the end of the float line, waiting for something to appear. I was at maybe 75 feet, the bottom was ten feet further. Just has I was thinking of how cold I was getting, I saw a Yellow turn behind a kelp "tree". I aimed at the other side, thinking it would come out the other way, but it appeared on the opposite side. I turned my gun, It went back behind the kelp. It did this a few times. When I finally caught on, I aimed on the right side and got it while it was fleeing.

(Me and Bill with our fish) 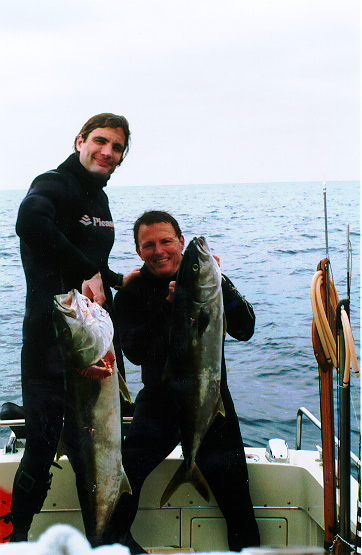 It was a good shot in mid section. The fish was swimming straight away from me. It was literally dragging me! The line got a bit entangled in the kelp and the fish was stalled. Then I saw this huge monster coming from the bottom. I thought it was a seal or a shark but I was wrong. It was a gigantic Black Sea Bass ! I watched it for a while then swam to it. Fortunately, it backed off and I was able to retrieve my fish. On the guess-o-meter, the Yellow was about thirty pounds, the Black could have been ten times that heavy.  For me, the odds of hauling in a fish that big were pretty low. I did not know at the time that the Black could have eaten that fish in one bite. 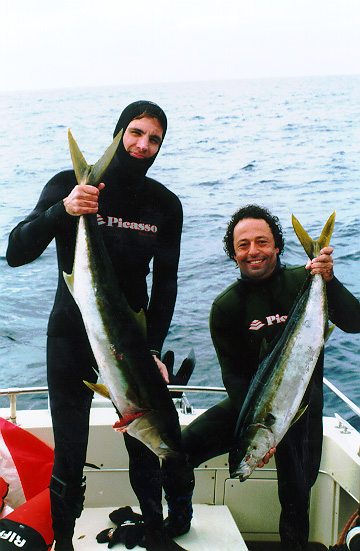