The second snow storm of December dumped another foot and half of snow. The city workers took a good ten days to clear the streets after the first snow storm. They sure were not improving as most of the streets were untouched a week after the latest dump. During both storms I had chosen to leave my car under the snow until I was forced to move it by the snow removal crews. 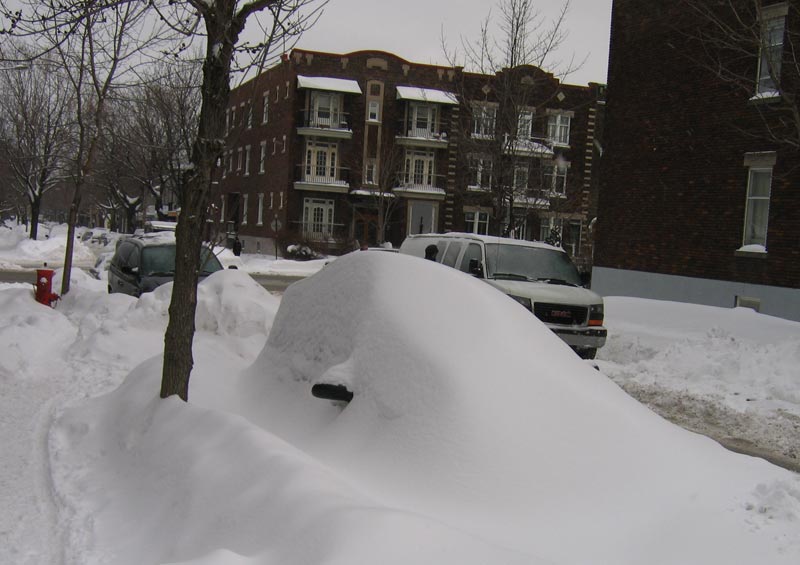 Jean-Jacques was in Cuba during the two storms but he got back soon enough to drive his Honda through the snow laden streets. We took his car to go diving on the 21st of December. The water was colder than the weeks before and the ice covered most of the Seaway. The few spots that were not covered fumed madly in the cold air. 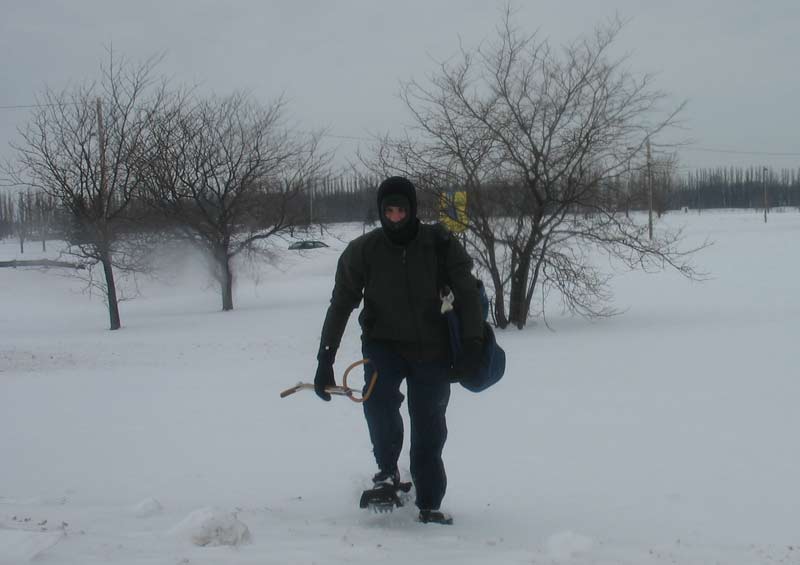 I had thought of bringing snow shoes to get to the water. Jean Jacques didn’t. Most of the way it was a toss as to if it was really better to use the snow shoes or not but once we got close to the water the snow shoes did make it a lot easier to get through the 5 feet of soft snow that had accumulated. 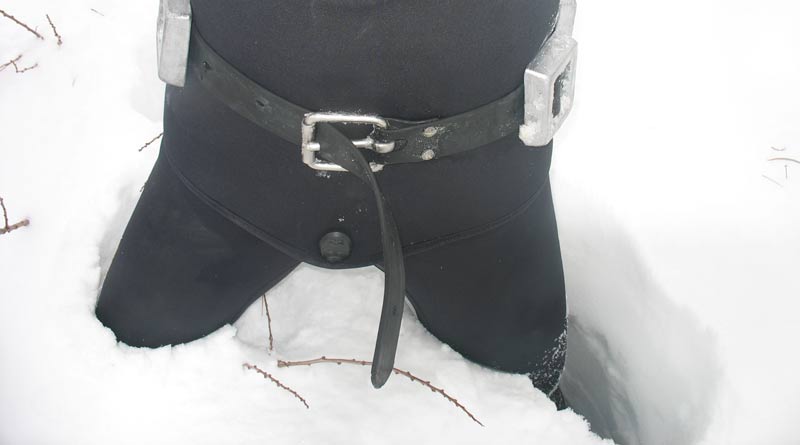 The Seaways was in winter mode with the walleyes and most other fish choosing calm water under the ice. Unfortunately unless we decide to hack a hole in the ice we are mostly limited to the areas with heavy current. 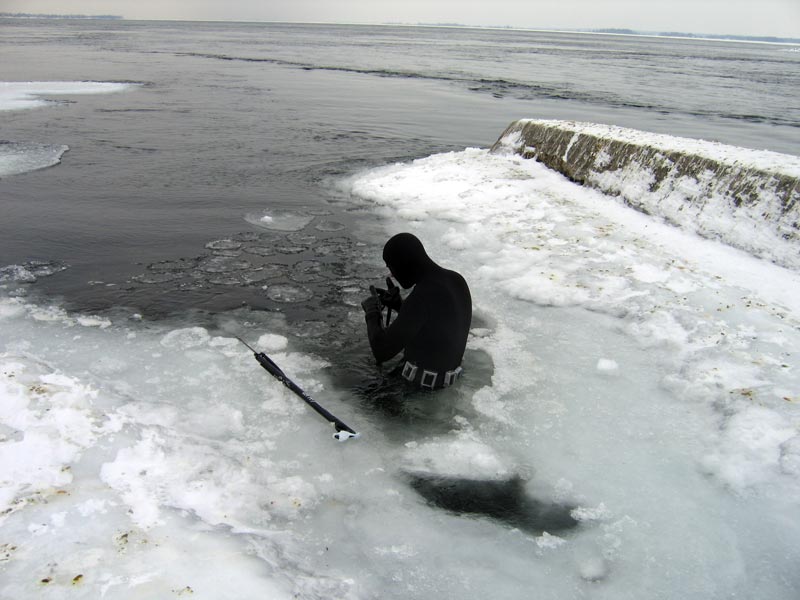 There were no fish to see but I was able to check the fish egg shelter I put in place two weeks before. The egg shelter is a metal grill that keeps the suckers (sturgeons, carp etc.) from getting to the walleye eggs. The eggs that drift under the grill are inaccessible to them.

All this winter diving was a lot of fun but there was no way I was staying in Montreal for the holidays. Jean-Jacques had to work but Antoine was eager to leave the snow just as I was. For Antoine this would also be his first time diving Florida.

Antoine is a newish diver but he’s in great shape, he plays underwater hockey and needs no supervision. This is key for me since I’m not really good at taking divers by the hand and I don’t want to have to worry about any of my diving partners.

I got a pile of Florida fish books from Quebec’s National Library, made reservations at the luxurious Peaceful Dove Inn, prepared my stuff, dug my car out of the snow and off we went. We stopped at Olivier Resca’s place to get one kayak. That’s as many kayaks I was willing to haul back and forth to Florida on my Ford Focus wagon.

It took Antoine a while to get used to car passing on the right, the speed limits, systematic tailgating and the absence of signaling. For my part I was used to all of the above as well as the liberal use of the cell phones while driving but the driver side GPS and TV sets unsettled even me. Next trip I’ll have my own driver side television so I can watch an entire season of The Wire and Family Guy while I navigate highway 95!

On the way we suffered torrential rain from Albany NY all the way to NJ. That was hell but then it cleared and apart for Antoine’s special brand of absurd humor the trip was uneventful.

In Florida the weather was great. Unfortunately we could not get fishing licenses on the first day since it was Christmas. We headed out anyway with the cameras. 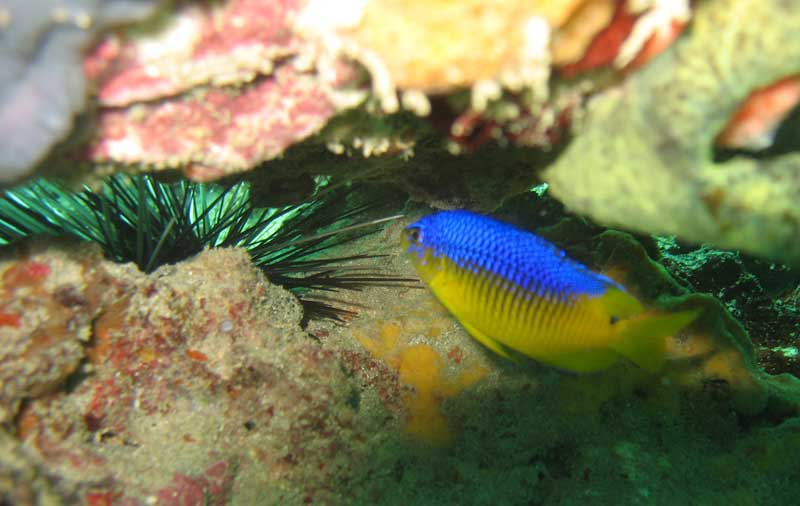 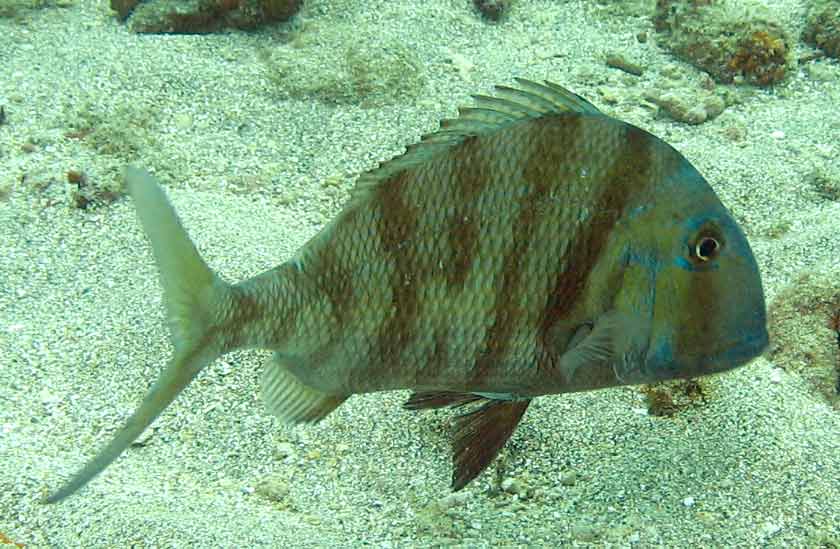 The next day we got to experience Florida’s new tourism initiative. The fishing licenses were raised 62% for non residents. It’s now a cool 52$ for one year with a lobster tag. Did my salary increase that fast without me noticing or is my disposable shrinking? I wonder how people on fix income feel about 62% increases? I digress.

On our first days we did not find many lobsters on first, second or third reef. It’s only on the third day that I started seeing them. Suddenly they were everywhere and in great numbers.

Antoine tried his best with the lobster stick but he caught his first lobster with his bare hands. If you can't walk, run...

Interestingly, while Antoine was working a rock with four lobsters I saw a nurse shark swim right to him. He had his head in a hole trying to poke a very resilient inhabitant. From the surface I saw the four foot shark swim to Antoine’s feet and follow his leg all the way to his belt. It looked as if the shark was touching him. I tried to warn Antoine but he never saw or felt the shark. I still hit my head thinking I should have filmed the encounter. I had the camera in my hand but I was too astonished to think of filming. 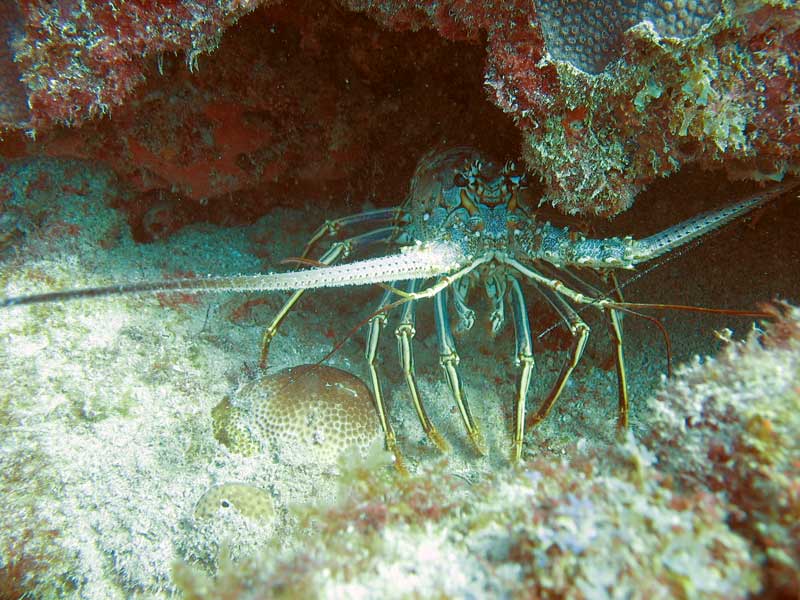 The fish were scarce in comparisons with other trips but ceros, small hogs, red groupers and some snappers were around. There sure was enough to eat. 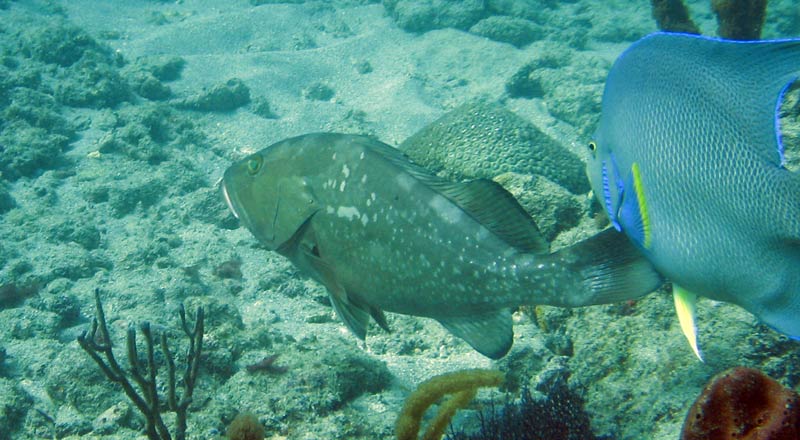 On this trip, I spent most of my time trying to get larger muttons from third reef. The muttons were very shy and the larger specimens very few. I never had a decent shot on the largest I saw. It was still a lot of fun diving with very good visibility and warm water.

Later in the week, when the wind picked up, a whole lot of jelly fish got pushed over the second reef. They were mostly moon jellies and I swam through them for a long time without getting stung and I started taking pictures of the jellies right in the middle of the thickest clouds of them. 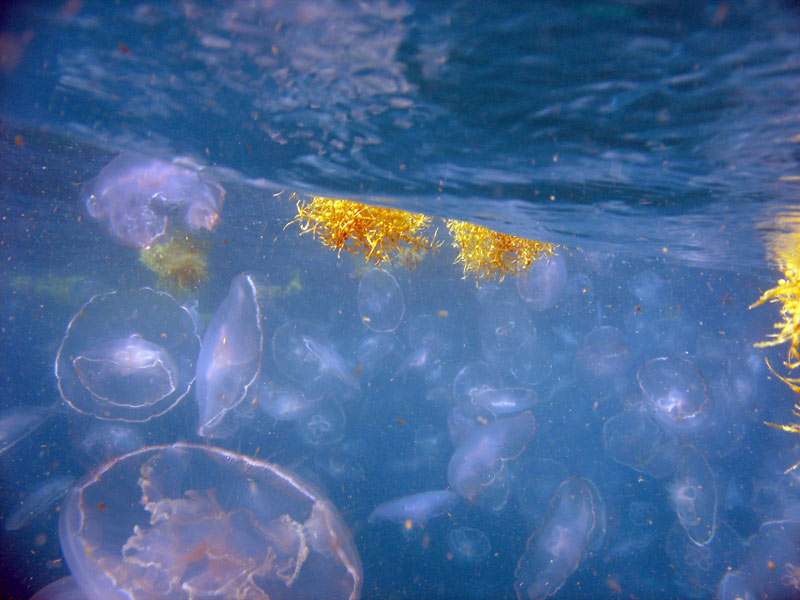 It took a while before I got stung on the face… but soon after I got stung again and again until I got very cautious. 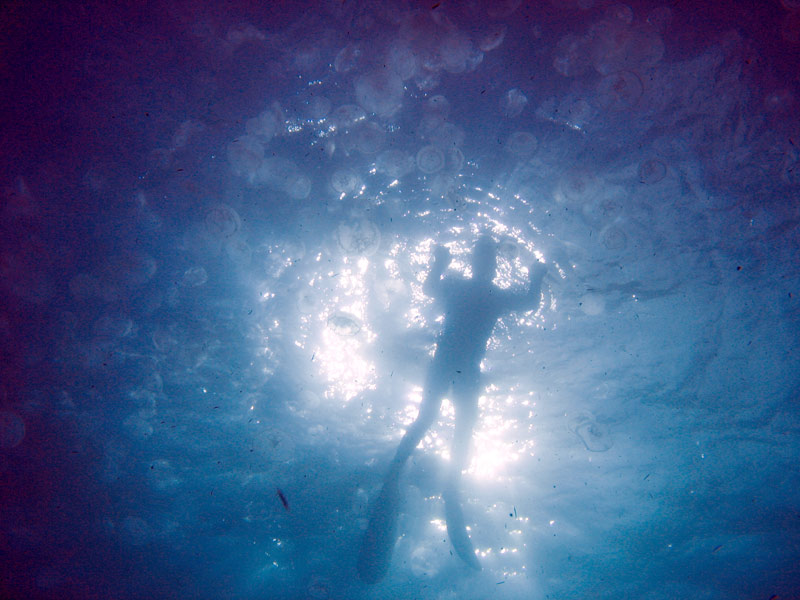 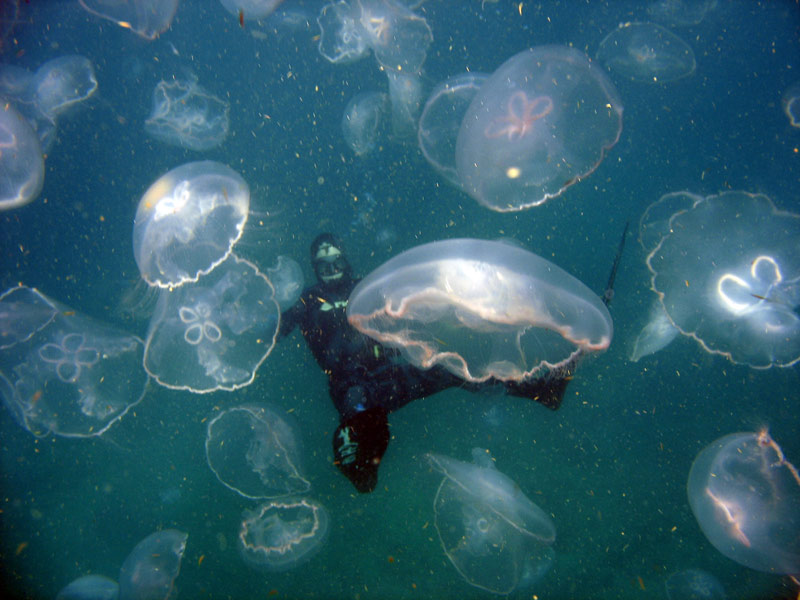 Bruno Munez joined us on Sunday. The wind was howling. The surf made the entry very interesting. I reversed surfed about 20 yards before breaking away from shore. I was lucky to keep all my stuff.

Bruno stayed on the second reef with Antoine. I went to third reef. While I was there Antoine and Bruno received a visit from a whale shark. Antoine almost sh.t his pants in the low visibility before he figured to what that very large mouth was attached to.

I came back to second reed at around 2 pm. Antoine wanted to get out and Bruno decided to stay on second reef since his ear would not pass in deeper water. I went back to third reef. I told Bruno I would return shortly.

Once on third reef I could not find any of the larger snappers and it took me a while to find even hogfish. By the time I decided to come back it was close to 5 pm. While I was fishing the kayak was getting a beating. It took wate. A lot of water. I did not have a pump. Anyway the sea was so rough that taking the hatch off to pump would not have worked favorably. I almost made it to second reef before I had to swim the kayak. The kayak was half filled and moved very slowly.

I got to shore passed 6 pm. It was dark. I walked back to the hotel. I learned that Bruno had lost his carbon fins while trying to get out of the surf.

The last day we dived I tried again for large muttons so I headed out to third reef. The visibility was incredible. The snappers were scarces while the boaters where out in large numbers.

Soon enough I got run over by a four outboard engine yacht. I was stalking ridiculously small snappers at 53 feet right under my kayak. I stayed under for about a minute and a half before I decided to come up. I heard an increasing engine noise so I decided to ascend very slowly. I hoped the noise would abate some time before I reached the surface.

I could see my kayak from the bottom. I figured I could surface right next to it and lower my chances of getting hit. I was still 20 feet from the surface with a total breathold time now passing the 100 seconds mark when the boat passed. The boat hit the tip of the kayak. Unfortunately my camera was not in video mode but I took a picture of the bubble track that passed right next to my kayak. The kayak was baring a 4 foot high dive flag and the sea was flat. 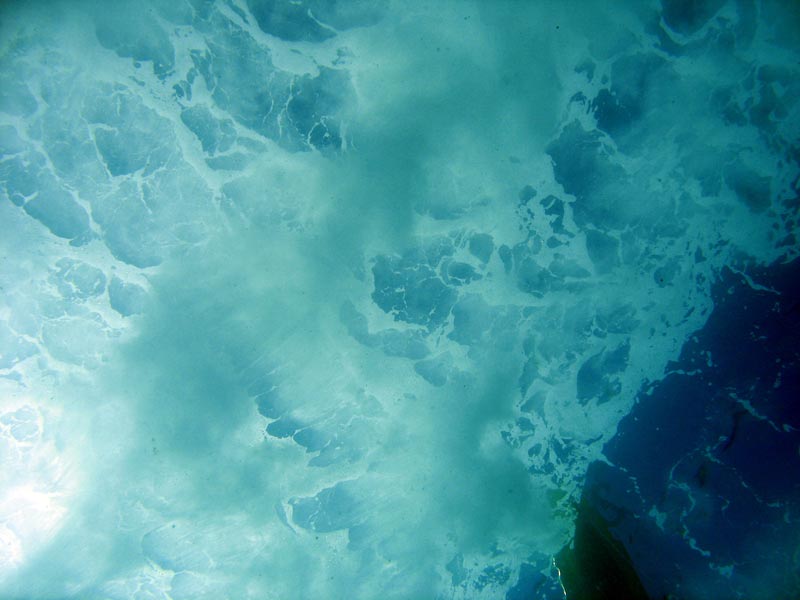 Antoine almost got run over by a cigarette boat that also passed in the swimming area in front of Oakland. The family in the boat was waving. Nice folks really, too bad we’re not allowed flame throwers so we can greet them properly.

The boats only got thicker and the next day we decided against going in. The weather turned cold the very next day.

On our way back we stopped at Amelia Island close to Jacksonville hoping to find a dive spot only to find out that you have to go 20 miles out to get any depth.