At a very young age my father took me fishing. I was hooked from the start. I remember spending days jigging for bass and casting Dart Devils over weed in the off chance I may hook a pike. Bass sometimes snatched the red and white spoon and I have to say that the Dart Devil was surely the lure I had the most confidence in.

I also remember getting my first fishing box. My father brought it back from Chicoutimi and it had a few trolls and sure enough the red and white spoon was among them. Later it was my grand father that gave me a huge fishing box with just about every lure they made between 1920 to 1977. I also got an original Mitchell 300 with its brass gears.

Another thing I remember from these days was the fear of getting snagged. It was not like I could go to the store and buy replacements since I had no revenue and in those days you would not have dared ask your parents for stuff at the department store like I see kids do it today. I did get some lures but basically I was loosing more than I could replace. This is probably why I always feel a bit sorry when I see lures on snagged even though I rarely rod and reel anymore.

Although I've seen a fair amount of lures stuck in the same spot in the past, nothing could prepare me for what I saw at this spot. We found thousands of lures and sinkers. It must have taken decades of heavy fishing and very stubborn people to amass such a large quantity of led in one spot.

Here's footage of us gathering them in the current in about 30 feet of water. It’s great training. On one breath hold we sometimes brought as many as 40 sinkers. In one three hour outing we brought back over 250 pounds of led and we are not even making a nudge. I doubt there are many other spots like this in the world. 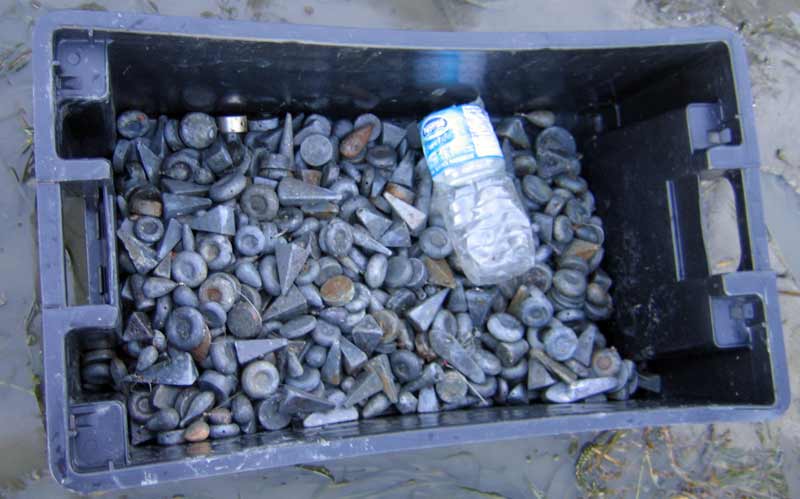