Shimy and I left Montreal on Monday afternoon. It was the first time Shimy took the 8 hour trip to Rhode Island. We were going for three days of bass fishing on Block Island. Chris had offered us to sleep on his boat and I had been able to secure ferry reservations for my car. Once on the island we’d have the kayaks, the car and all our gear. This was a very good setup.

On Tuesday, we got to the island before noon and hit the water with the kayaks in the bay east of the ferry dock. We rounded the point and pushed a little further than the South West lighthouse. I chose to start fishing far from shore in about 50 feet of water. All the boats were trawling at that distance, so I figured we may as well join them.

The water was incredibly cold and a very surprising contrast with the super heated air. My five mil suit was barely enough and I cursed myself for bringing clot gloves. It was that cold. I wanted to work on my breathold and warm up so I did quite a few dives there but there were no fish. I knew that the cold water was not appropriate for bass anyway.

We slowly worked our way closer to shore. There were no big bass but I found plenty of scups and triggers. I also had a school of bonitos pass under me. I saw some blues and small bass close to shore but the noteworthy thing was the amount of sharks. I must have crossed half a dozen dogfish in as many dives.

A few hours into our dive, Shimy had ear pains. We headed back to the car a bit before sunset. Shimy ended up at the island’s clinic. The doctor filled him up with Vicadin, Ibuprophen, pseudoephedrine, topical and oral antibiotics. Shimy was in such pain that he was not surprised when he was told that he should not dive for a few days.

The next day, I dove Black Rock and got into obscene amounts of triggers. They were so thick that it got scary. What if they realized that they were capable of munching me to death?

As I laid on the bottom waiting for scups or bass, the triggers floated above me. I shot a scup and as I was putting it on my stringer, I started looking a little closer at the triggers and eventually realized that there were jacks among them. I quickly put the scup on my back, put the shaft in the mech and loaded one band without setting the shooting line. I lined the jack up and shot him in the gills. That jack really gave me a good run for its size.

I shot a second jack minutes later. They looked like lesser amberjacks. Unfortunately, I did not take a picture of them.

Later in the day, I decided to head to the Bluffs and walk the 500 steps to the water. I dove to the left of the stairs, in the rocks. I broke a fin right as I got in. I threw the broken fin to shore and continued with one fin.

The surf and the current were giving me a hard time, especially with the dive float. I was being taken west. Pretty soon I was into schools of bass and I eventually shot a 25 pounder.

Unfortunately with only one fin and a fish on my back, I was having a very hard time swimming around. So I decided to head back to my point of entry but that was not happening. Instead, I ended up exiting on the rocks a few hundred yards from my entry point. I had to drag everything on the rocks in the unforgiving heat and then go up the stairs. By the time I got to the car I was spent.

Chris wanted to go diving the next day at 5 am. Since I was sleeping on the boat, I knew that I could not escape the early morning follies.

Jimmy woke me up when he stepped on the boat. Shimy and Chris soon followed. We headed to the outer reefs. Chris had told me that there were very few bass close to the island.

Once on the reef, Jimmy and me started the first drift. On my first dive I landed in a pile of bolders but there was no school to greet me. I laid there for a while before a shadow approached. It stayed far but I had a 120 so I took the shot.

The 42 pound fish ran at the end of my shooting line but I managed to bring it to the surface without using the reel. I could see that my brand new shaft was bent.

We drifted a few times over the outer reef and landed two more bass. Shimy was witnessing this from the deck, still unable to dive, but there will be other occasions. 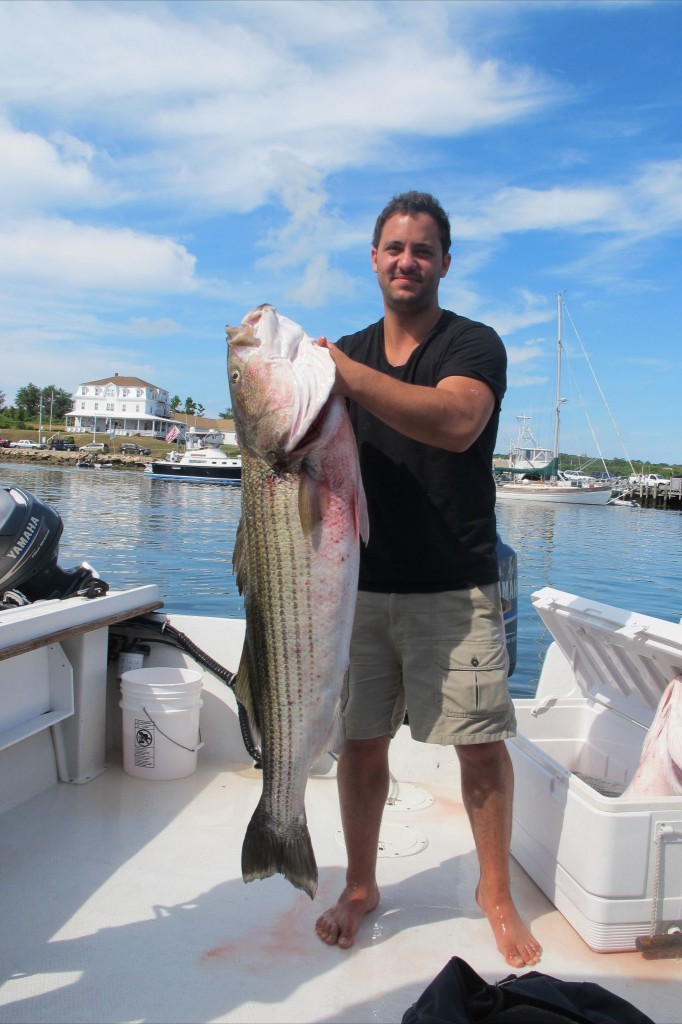 4 thoughts on “Block Island with Shimy, Chris and Jimmy”